The Bacton to Walcott Sandscaping Coastal Management Scheme comprises the first Sandscaping solution in the UK, and is the little cousin of the Zandmotor in the Netherlands. The scheme protects the cliffs at the nationally important Bacton Gas Terminal from further erosion, and extends the life of the sea wall that protects the downdrift villages, granting the communities valuable adaptation time. Its construction was only possible due to the unique public-private partnership between the Bacton Terminal Companies and the local authorities. The choice for a sand engine, a solution not tried-and-tested in the UK before, was the result of an appraisal process, led by RHDHV in close collaboration with the Terminal companies and local authorities, during which multiple other, more traditional, options were considered as well. It was concluded, however, that a sand engine was the only feasible answer to a problem previously declared ‘unsolvable’.

The design of the sand engine had to fulfil a number of requirements: protecting the cliffs against a 1 in 10,000 per year joint probability event, provide a buffer against sand losses and re-supply the beach in front of the villages to extend the remaining life of the local seawall. 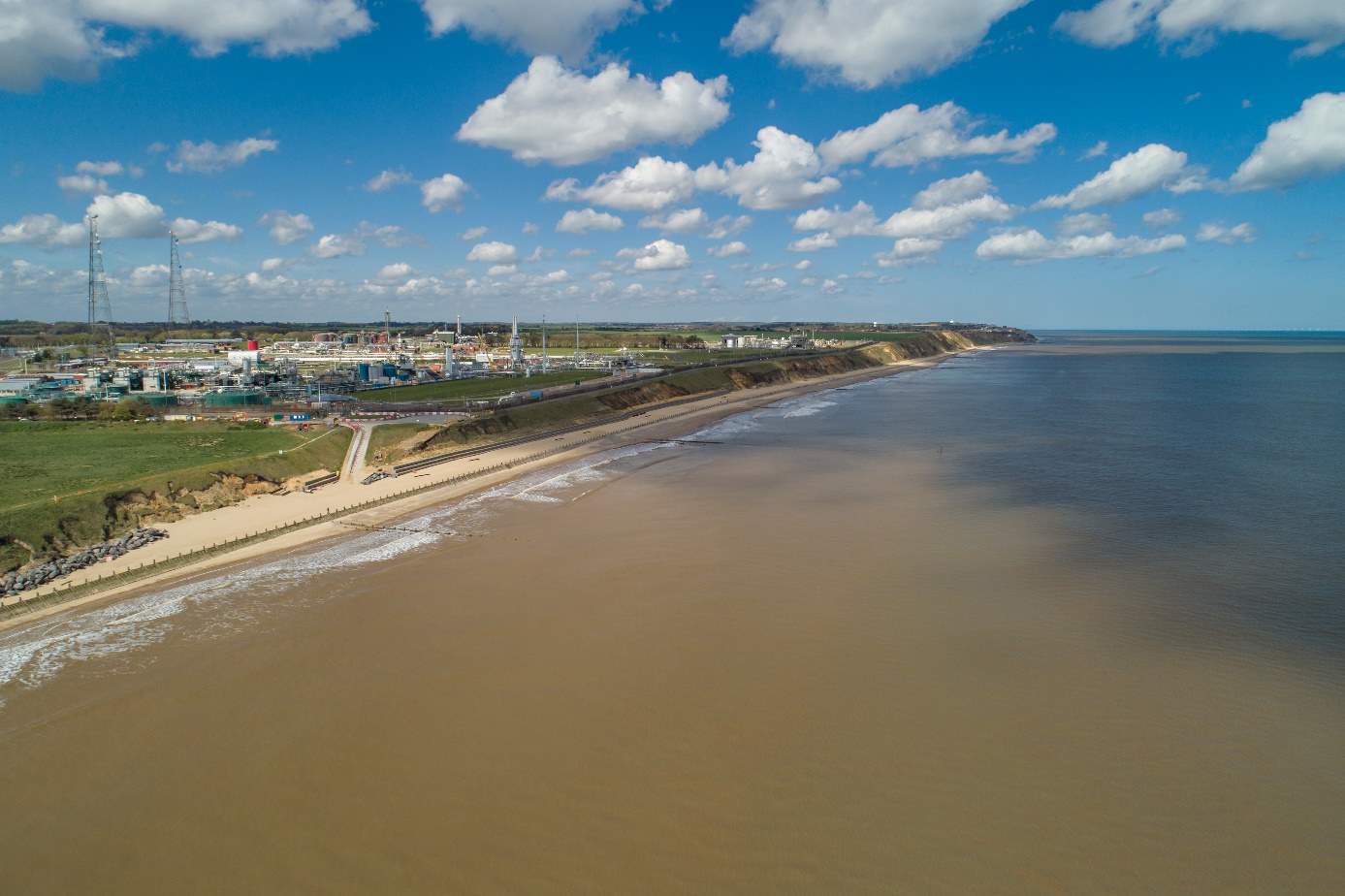 Extensive numerical modelling was used to derive a protection profile for the cliffs under the Terminal, as well as to assess the future lowering of the beach levels in front of the villages.

Cliff protection is usually designed by choosing a protection level on the cliff face based on a desired joint probability between wave and water levels, and then designing a structure that is stable under that design condition. This strongly simplified approach was deemed to be less suitable for this project, because waves can still run up the shallow slopes of a beach nourishment, leading to wave impacts higher up on the cliff face. A bespoke approach was therefore developed, building on earlier similar studies: wave loading on the cliff face was characterised by the number of ‘hits’ above particular levels on the cliff face. Recognising that the specific nature of individual cliffs strongly dominates erosion, the team developed a practical design approach based on historic erosion and non-erosion events, and their hydraulic characteristics. AMAZON, a high-resolution wave overtopping model, was used to derive the hits above particular levels on the cliff face for each design option for comparison with the historic events.

A 2D sediment and hydrodynamic model (TELEMAC-MASCARET) was used to simulate the development of the design options with respect to the planform of the nourishment. By running sets of short-period runs covering 1 year and a small number of long-term simulations covering 10 years or more, the modelling provides detailed information on the decadal changes to be expected and the sensitivities of the runs to the parameter settings and the shape and size of the nourishment.

As with all coastal models, the area model does not capture the ongoing and gradual process of beach recovery under normal met ocean conditions. As a result, the model was not able to represent realistic baseline beach development, and was therefore unsuitable for the role of primary design engine for this project. This issue was resolved by developing a Conceptual Model that combines the strengths of both 1D (longshore shoreline model; LITLINE) and 2D models (area model; TELEMAC). For the Conceptual Model, LITLINE was ‘extended’ to include sediment loss to deeper water (offshore losses) by including a sediment sink, which was calculated from the TELEMAC (2D) results.

The resulting bespoke Conceptual Model was agile enough for optioneering, whilst adequately representing the relevant beach processes. Using this model, the long-term development of the beach at the terminal and villages could be studied for each option, to make sure that 1) the buffer at the terminal was sufficient, and 2) the benefit to the villages was optimised. 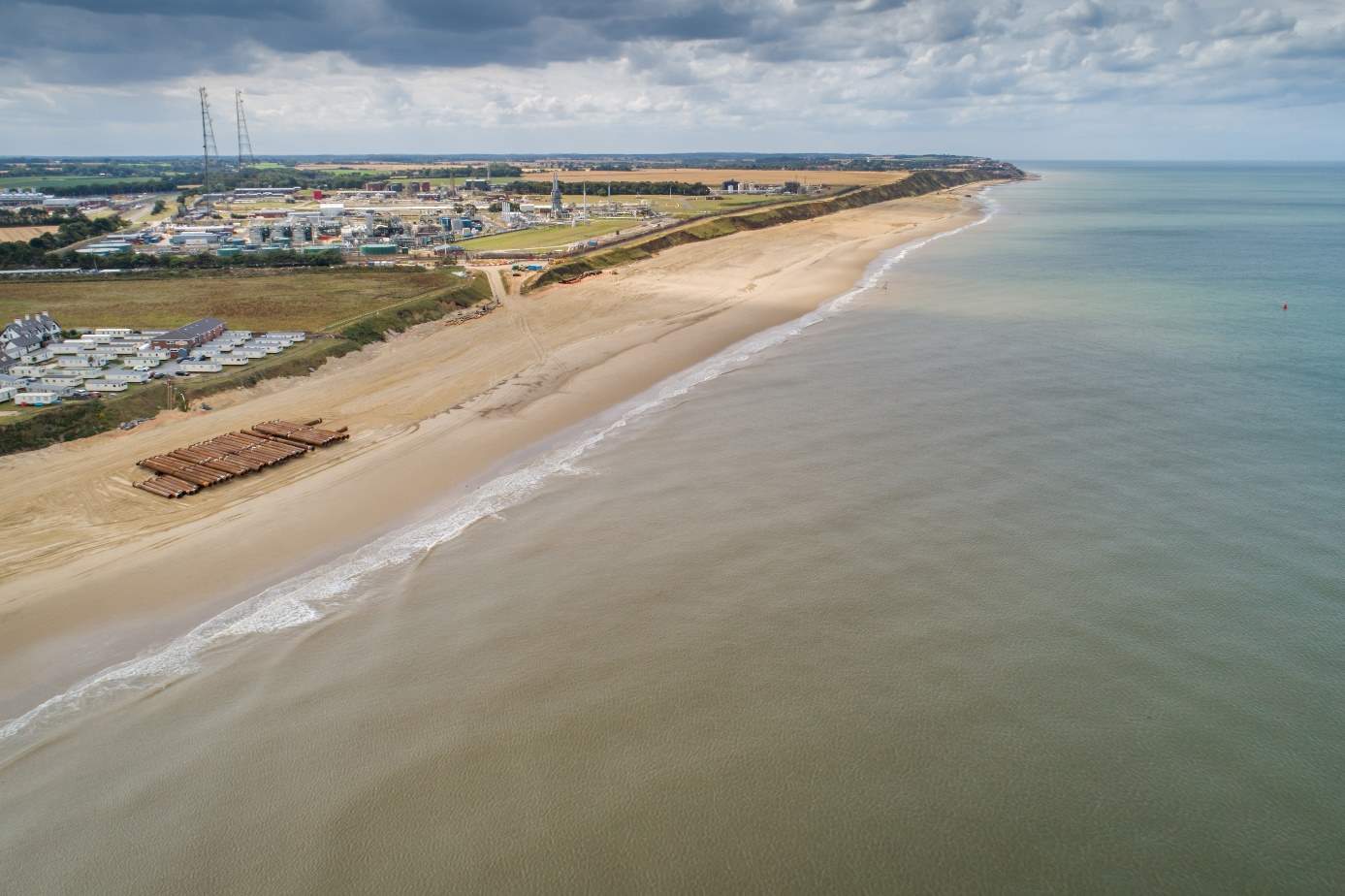 The resulting design is expected to protect the terminal infrastructure for at least the next 20 years, whilst also increasing the initial bed level at the villages as well as slowing the erosion rate, thereby extending the life of the seawall. The development of the Sandscaping scheme is currently being monitored using innovative monitoring techniques, and a Digital Twin has been developed to update the Conceptual Model using the monitored data to provide the Terminal Companies and the local authorities with the information they need for their investment decisions in the years to come.

At this point of the page an element has been included which is hosted by a third party. It's possible that this and other third parties could place tracking cookies on your computer. Therefore we are required to ask consent before we can display this content. Read our cookie statement for more information about our policies.