Pasay Harbor City reclamation Phase 1 is a two-islands configuration with a total land surface of 265 hectares. As part of the land reclamation a revetment is designed. On top of the revetment two wave walls are being placed. The combination of the two walls gave rise to a luxury promenade on which temporally markets, and shops are placed. The combination of two wave walls is rarely used and consequently limited engineering guidelines exist for these types of structures. To determine the effectiveness of the design, various design parameters are required such as wave overtopping over the first and second wave wall and the forces on both walls. Royal HaskoningDHV was contracted to review the design of the revetment and to give suggestions for the optimization of the design. These optimizations could later be applied in the physical model tests.

At this point of the page an element has been included which is hosted by a third party. It's possible that this and other third parties could place tracking cookies on your computer. Therefore we are required to ask consent before we can display this content. Read our cookie statement for more information about our policies. 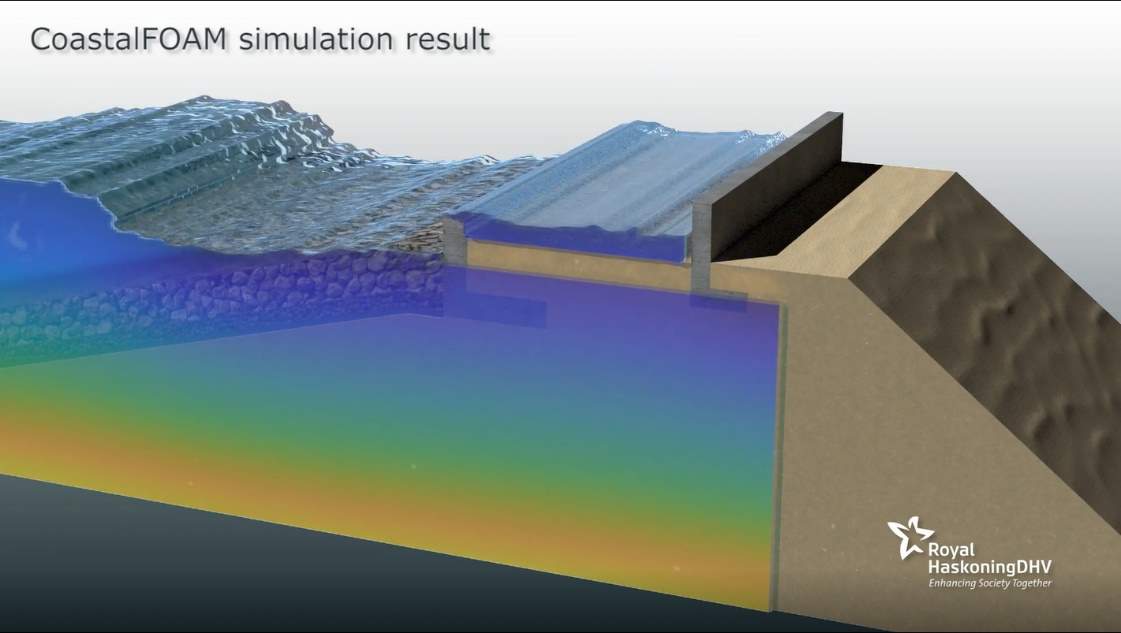 As traditional hydrodynamic models are extremely limited in modelling a double wave wall on top of a revetment, the Computational Fluid Dynamics (CFD) software package CoastalFOAM was used. In this model a real scale digital wave flume is simulated, calculating the water velocity, hydrostatic pressure, and non-hydrostatic pressure over the entire model domain, including the inside of the rock berm of the breakwater.

The digital wave flume provided time series of the wave overtopping and timeseries of the forces on the wave walls. Based on these timeseries several optimizations were suggested which could later be applied in physical model tests. The digital wave flume demonstrated the possibilities to optimize the structure. This project has demonstrated the benefits of CFD modelling in the design process.