For the extension of an existing port a new breakwater is to be constructed, part of which a caisson breakwater with rock berms. To optimize the design, various design parameters are required such as wave overtopping over the caisson, wave reflection against and transmission across the caisson, forces on the caisson, overturning moments, and flow velocities. Royal HaskoningDHV has been appointed to review the design of this caisson breakwater prior to the execution of physical model tests. 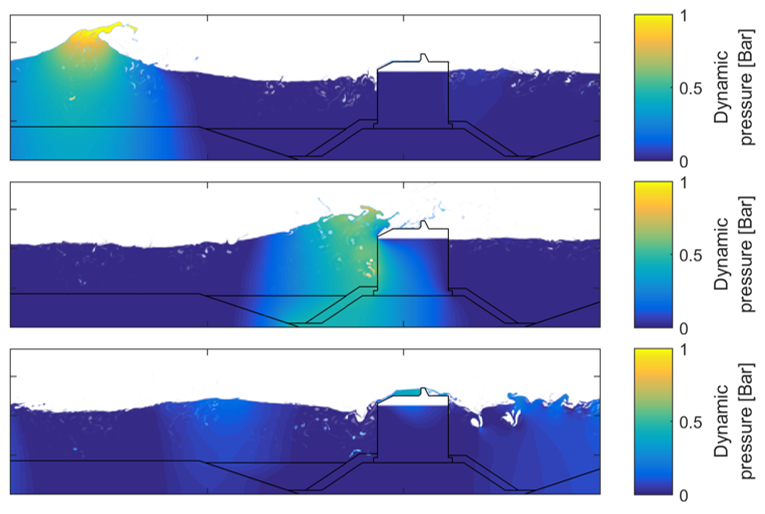 As traditional hydrodynamic models are not able to simulate a wave hitting a breakwater, the computational fluid dynamics software package CoastalFOAM was used. In this model a numerical wave flume is simulated, calculating the water velocity, hydrostatic pressure, and non-hydrostatic pressure over the entire model domain, including inside the rock berm of the breakwater.

The different layers of the breakwater cross section and their properties were considered separately, and three hydraulic boundary conditions were considered. Pressures in each grid cell were transformed into forces and overturning moments. Wave overtopping was measured through different regions above the caisson. After analysis of the results an optimized caisson design was assessed, in which a slope was added at the seaward top corner of the caisson and a wall positioned on top of the caisson.

The overtopping volumes, reflection and transmission coefficients, forces and overturning moments estimated by the model for both caisson designs can now be used for further design optimization. This project has demonstrated the benefits of CFD modelling in the design process, so that the extent and costs of physical model tests can be reduced.